Casey, an 18 month old desexed male Burmese cat, was presented one Friday afternoon after escaping from the house and being bitten on the head by a dog. Casey had bruising to the top of his head, and generalised inflammation to the head and face. The exam also revealed a separated symphysis of his low jaw. These injuries are common where a cat is hit on the head as rotational forces applied to the head and jaw, leading to separation of the lower jaw at this point. X-rays revealed no other damage to head, jaw or face structures. He was placed onto IV fluids, given a long-acting antibiotic, NSAID anti-inflammatory injection, opioid (buprenorphine) injection and an opioid (fentanyl) patch applied to his foreleg. His breathing was stable, and he appeared to have suffered no chest or abdominal injuries. He was placed into hospital care and allowed to rest overnight. 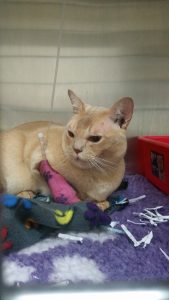 The accompanying photos show Casey much brighter and happier the next morning.

20 inch needles were placed through the skin either side of the lower canines to act as guides for the wire. 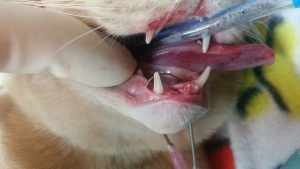 Wire is then placed around the lower canines to hold the lower jaw symphysis together to allow healing to occur. The wire is tied beneath the jaw, after removal of the needle wire guides. The wire tie is often left outside of the skin, whereas I prefer to cut the skin, allowing the wire to be buried beneath the skin during this healing period so the wire does not get caught on bedding or other material. The wire is usually left in place for six to eight weeks. 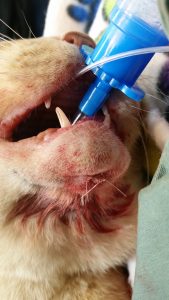 The result after the wire is tied and buried beneath lower jaw skin. 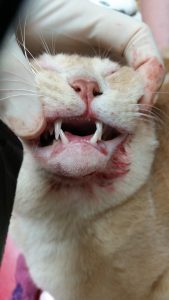 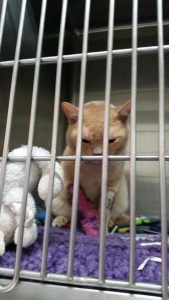 After surgery, recovering in hospital

This procedure is quick and easy to perform, and very effective. The whole account for the time in hospital, fluid therapy, anaesthetic, surgery and medication cost just $710. Veterinary care does not have to be expensive and we try very hard to keep these costs within reach of more owners. Treated at an emergency centre then referred to a specialist centre, would have lead to an account of $3,000 - $4,000 or more. While these centres provide fantastic care, these costs are often incredibly onerous for most owners. We regularly take enquiries from all over Victoria, where clients are looking for a possible alternative to very expensive quotes.

our pricing philosophy
Back